Home » Articles » Gut Microbiome 101, Part 7 - The relationship between exercise and the microbiome

Welcome to Part 7 of the Gut Microbiome 101 series, in which we will look at the relationship between exercise and the microbiome. 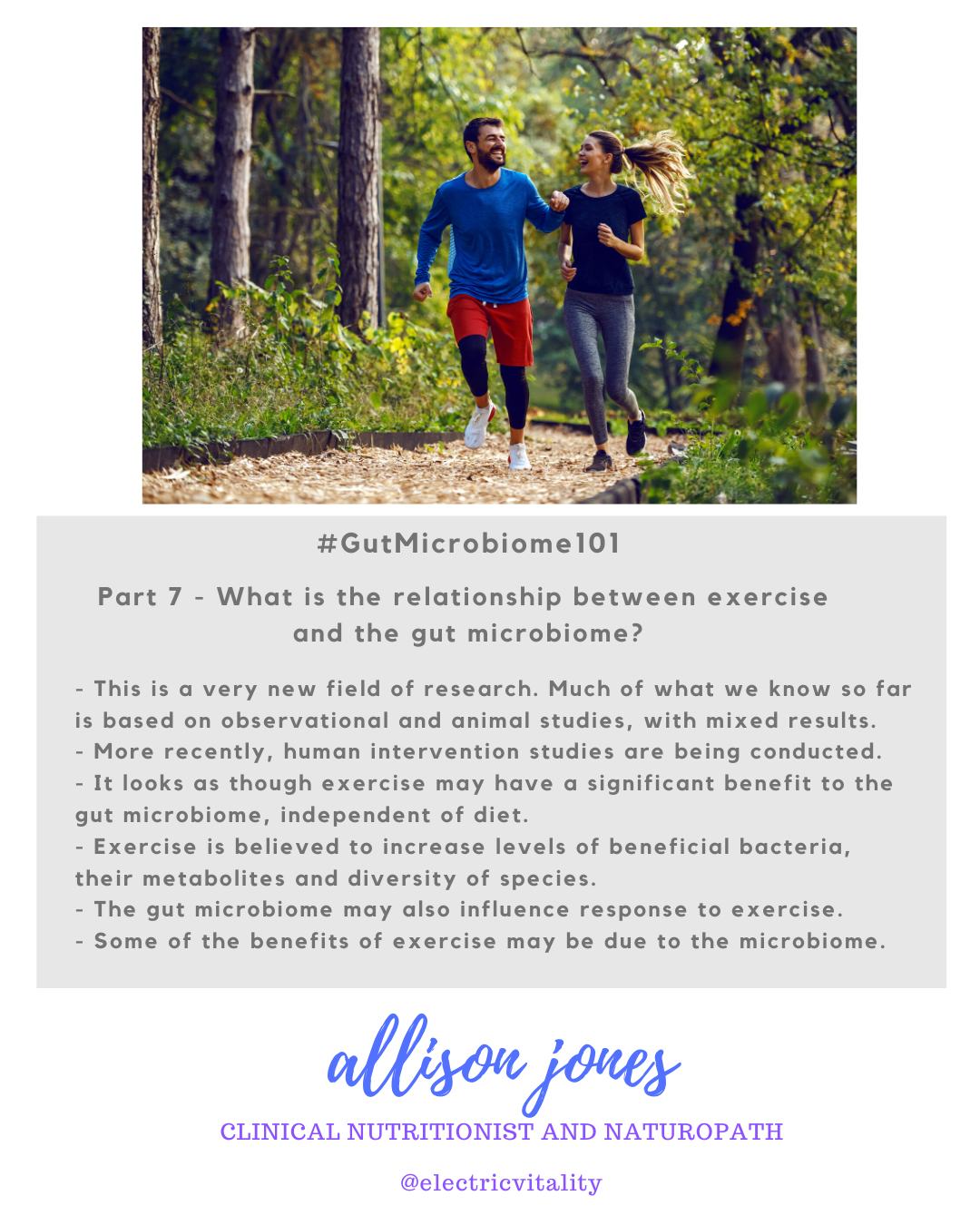 TL;DR: The relationship between exercise and the microbiome

Most of us have had it drilled in since early childhood that exercise is good for us. And now, we are finding out that exercise can modulate the gut microbiome in various ways, which may be one reason exercise has such great benefits including anti-inflammatory effects and mental health improvement. Those microbes in our gut really do work hard for us!

Prior to 2010, there wasn't really much research done on the relationship between exercise and the microbiome. So, we are in a period of intense learning right now.

As with pretty much everything gut microbiome, there is a bi-directional relationship between us, the host, and the microbes living in us. We co-evolved with them, so our relationship is intimately entwined.

Most research done so far either looks at associations between exercise and the gut microbiome in humans or has been done in rodents, not humans. We can still learn a lot from this type of research - it can be used to develop highly targeted interventional research that is more likely to generate useful insights such as why one person has a particular benefit from exercise (eg. increased insulin sensitivity) while another person may not experience that benefit.

Association studies thus far have resulted in inconsistent findings in terms of the effect of exercise on different groups of bacteria and also the diversity of individuals' microbiomes. The inconsistency can usually be explained by all the different variables at play such as type of exercise, weight, diet, biological sex, body fat and blood glucose. Every individual is different, so even if they do the same type of exercise, they may not have the same microbiome changes as someone else. This is a perfect example of the complex interaction between the microbiome and the various body systems in humans. It means that we can't necessarily say that exercise will have specific effects on the microbiome for every individual.

However, much of the associational research does suggest that exercise increases levels of beneficial bacteria, important metabolites they make and also improves diversity of species.

Studies in mice have shown that exercise has benefits to the microbiome that are independent of diet - this is also believed to be true in humans. Mice that exercised had a different microbiome to the non-exercisers. Additionally, exercise minimised the negative, inflammatory effects in mice that ate a high fat diet.

It's only more recently that cause and effect in humans has been studied in more detail to determine what mechanisms might be at play.

In 2019, a study in China found that some pre-diabetic men in the study were non-responders to high intensity exercise - that is, their metabolic markers didn't improve, whereas other participants' markers did. When the participants' microbiomes were analysed, it was found that the responders' microbiomes helped to break down amino acids that can promote insulin resistance. In the non-responders, a different microbiome composition was found post-exercise - one which negatively influenced insulin sensitivity. Germ free mice had the human microbiomes of either responders or non-responders from the study transplanted and the resulting effects on blood sugar were consistent with what had been observed in the human participants.

Scientists are now looking at the mechanisms behind all this – not just the microbiome, but also the benefits of exercise to the overall gut environment.

The gut environment and function itself, including the gene expression of immune cells, blood flow, motility production of inflammatory and anti-inflammatory compounds, may also change during exercise, exerting a direct effect on us and also via the microbiome.

It's also possible that some types of exercise exert temporary negative effect on the gut environment that eventually produces a long term benefit.

We do not yet have confirmation of the exact mechanisms behind the beneficial effects of exercise on the gut microbiome, but this is precisely what researchers are now focused on. It's likely that short chain fatty acids produced by the microbiome are involved. This includes butyrate, which is a key health-promoting substance that has been shown in some studies to increase after exercise.

Are you looking for recipes to support your gut microbiome health?

My second eBook, C'mon Gut Happy, is just what you need! Over 30 delicious plant based, gluten free recipes with evidence based ingredients to support your gut microbiome health!
Instant download here.