Who would have thought it would be possible to make a cupcake that has the texture of a marshmallow - but that's exactly what these Chocolate Mochi Cupcakes are! Rich dark chocolate pairs with a delicious chewy texture to create an unforgettable treat that you'll love. These cupcakes are easy to make, with simple ingredients - they also happen to be vegan, egg-free gluten-free and Paleo-friendly.

This recipe came about a bit by accident. I came across a really simple vegan chocolate cake and decided I'd like to experiment with using a special type of flour used to make mochi. I'd been on a baking bender since February, so this creation came about during that rich period of experimentation.

Mochi is a Japanese rice cake snack made from a type of rice flour called mochigome, a special glutinous short grain rice variety. Don't worry, it's gluten free, despite being glutinous, which really just means sticky! Traditionally, mochi is made by steaming the rice and then pounding it in a ceremony called mochitsuki.

More modern versions of mochi use glutinous rice flour, although technically - anything made from the flour and not the cooked rice grains - should be referred to as dango, not mochi. Mochi is how most people would refer to these snacks though and the flour - not the cooked rice - is used for a more modern preparation method, so that's what we're going for here with this recipe.

Mochi is believed to have originated in China originally, though after it was introduced to Japan, that country developed a strong mochi culture - so much so that mochi is now strongly associated with Japan.

Mochi can either be used for savoury elements of a meal, such as mochi pieces in soup, or in sweet snacks such as ice cream and sweet snacks. Non-Japanese people have also started to work with this special ingredient more to make mochi-style cakes, cupcakes and cookies for example.

🧁 What type of flour is used for mochi?

Mochi snacks in the baking sense can be made from a few similar types of flour which all share the same sticky characteristics: mochiko, sweet rice flour or glutinous rice flour. These types of rice are readily available, although mochiko is mostly found in Japanese grocery stores, so is a little harder to access. General Asian grocery stores and even some supermarkets carry sweet rice/glutinous rice flour and it's also super affordable. It's a pretty cool thing to only require one flour in a gluten-free baked good, which is one reason I love using this type of flour. Used on its own, it will produce a a chewy texture so if that's not what you're after, then you would want to use something else.

💜 What you'll love about these Chocolate Mochi Cupcakes

📌 Tips for getting the best results from this recipe

🧁 What frosting can I use for these cupcakes?

I developed two versions of a dairy free strawberry frosting which are both amazing with these cupcakes!

You could also use your favourite buttercream frosting recipe or use store bought frosting for ease.

🎂 Can I make these as a cake instead of cupcakes?

Yes you can! This recipe will make one 20cm/8 inch cake. Grease and line your cake tin with baking paper. After pre-heating the oven, bake at 170C/340F for 60 minutes on the middle rack. Cover the cake at the 30 minute mark with foil with 8 puncture marks made in the foil. After baking, let the cake cool in the tin for 1 hour on a cooling rack then turn out to continue cooling. It takes around 3-4 hours to cool completely. You can then frost the cake or serve with whipped cream and berries.

How about some vegan white chocolate? Or my Miracle 5 Ingredient Flourless brownies? Whatever takes your fancy, I've got something you'll love!

🌟 Did you make this recipe? Leave a ⭐️⭐️⭐️⭐️⭐️ star rating and a comment below to let us know how it turned out. Save it for later by pinning to your favourite Pinterest board and make sure to tag us on Electric Vitality's Instagram to show off your cooking! 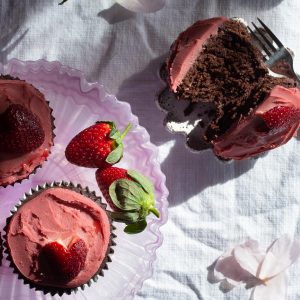