Baklava Buckwheat Porridge is my gluten-free homage to the classic Middle Eastern, Mediterranean and Balkan dessert known as baklava. Being gluten-free, baklava is sadly a no-go for me due to the filo pastry. So, what’s a gluten-free girl supposed to do? Well, take the flavours and textures and come up with my own homage to baklava, only in porridge form! Read on to learn more about the history of baklava and how to make this unforgettable buckwheat porridge.

Baklava Around the World

Baklava has a long and rich history in the region known as the Middle East and also in Greece. As with many recipes around the world, the specific ingredients are similar but also slightly different depending on where exactly the baklava you’re enjoying is from. There are varieties of baklava found in Iraq, Turkey, Armenia, Greece, Lebanon and Iran amongst other places.

If you're curious about the origins and fascinating history of baklava in different regions, this article from SBS Food is great.

Missing Baklava on a Gluten-Free Diet?

Since I’m gluten free, baklava is a no-go for me and I really do miss it. Truly, there aren’t many gluten-containing foods that I miss, but baklava is definitely in the list. I’ve never heard of gluten-free filo pastry, perhaps someone will crack the code in the future - we can only hope! Mary the Paleo Chef has a Paleo baklava that uses coconut wraps instead of filo. Obviously, it’s not a traditional or authentic version but it certainly looks like an amazing creation.

So, what’s a gluten-free girl supposed to do? Well, take the flavours and textures and come up with my own homage to baklava, only in porridge form!

So, this recipe for Baklava Buckwheat Porridge contains the key ingredients of nuts, spices and honey - the nuts are also candied to replicate the crunch of the filo pastry used in baklava. Depending on the region, the nuts typically used for baklava are walnuts, pistachios - almonds and hazelnuts are also used. In my image, I’ve used a mixture of pecans, walnuts and pistachios. Typical spices found in baklava include cinnamon, cardamom and cloves. Saffron is also used in some varieties. Rosewater and orange blossom are often used along with honey. I’ve kept this recipe pretty simple, but you are welcome to make this recipe your own with your favourite nuts, spices and you can also experiment with the rosewater and orange blossom too! Maple syrup can be used in place of honey if you prefer.

Buckwheat Porridge is a great alternative to Oatmeal

If you're looking to mix things up at breakfast time, try buckwheat instead of oatmeal or oat porridge. It has a lovely, slightly chewy texture and a very unique flavour. Out gut microbiome thrives on diverse food choices, so a simple swap occasionally will do you a world of good.

I already have two other buckwheat porridge recipes because I love the stuff! You can see my Chocolate Buckwheat Porridge here and my microbiome recipe eBook C’mon Gut Happy features a killer Carrot Cake Buckwheat Porridge...how’s that for some alliteration?!

If you’ve never had buckwheat, but are intrigued, I definitely recommend giving it a try - if you normally make porridge from oats, then trying some buckwheat porridge will really impress you and assist in diversifying your gut microbiome. We know that diversity is a key marker of microbiome health, and we achieve that by expanding our repertoire of plant based meals.

When purchasing buckwheat, you need to buy the groats or grains and they need to be raw. You don’t want to buy kasha which is roasted buckwheat groats, even though in many cultures, these are the type used to make a porridge.

Why you'll love this recipe

Please see the recipe card below for ingredient amounts and notes.

If you're looking for more gluten free breakfast ideas, I've got you covered!

How about Banana Protein Muffins? They're a portable breakfast option that are great for meal prep.

Baked Potato Pancake with Chorizo and Fluffy Protein Pancakes are also excellent cafe-worthy breakfast recipes for you to enjoy. 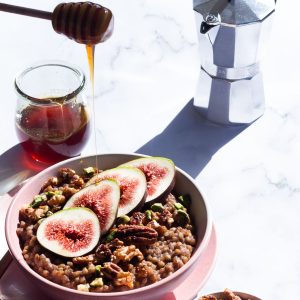 « Butter Beans with Caramelised Onion, Kale and Preserved Lemon
My experience of the SIBO Elemental Diet »